Let our experts help you choose the right drive and enclosure
Get a quote
Custom solutions for complex industrial applications
Magneto Electric specializes in the sale, installation and programming of motor controls including variable-frequency drives for motors used in HVAC systems, Pumps, Fans, compressors and many other industrial applications.

What is A VFD

A variable-frequency drive (VFD) is a type of motor drive used in electro-mechanical drive systems to control AC motor speed and torque by varying motor input frequency and, depending on the electric circuit, to control associated voltage or current variation. Systems using VFDs can be more efficient than those using throttling control of fluid flow, such as in systems with pumps and damper control for fans.

In North America, an estimated 60–65% of electrical energy is used to supply motors, 75% of which are variable-torque fan, pump, and compressor loads. It’s estimated that if efficient energy improvement technologies such as VFDs were implemented, nearly 18% of the energy used could be saved. In many applications the net payback in energy savings is significant.

Fixed-speed loads subject the motor to a high starting torque and to current surges that are up to eight times the full-load current. AC drives instead gradually ramp the motor up to operating speed to lessen mechanical and electrical stress, reducing maintenance and repair costs, and extending the life of the motor and the driven equipment.

Onsite start up support for new and retrofit projects

Who We Can Help 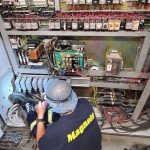 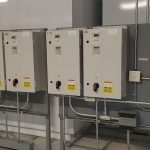